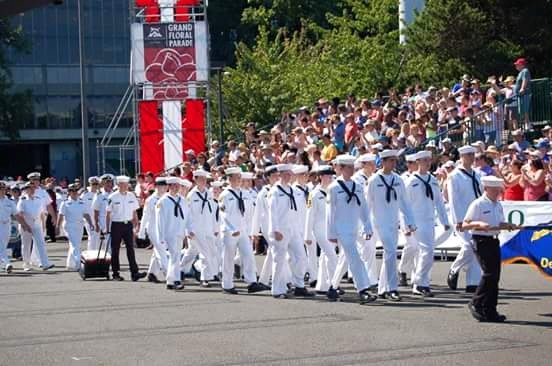 By Darlene A. White

The school will be partnering with the United States Naval Sea Cadets Corps(USNSCC) for a youth leadership development program that will be incorporated into the curriculum at the school.

“It gives them a strong foundation to build on as they progress through life. A lot of the problems we see with youth are not simply socio-economic related, some of these issues stem from inadequate and misguided morals and values.  I believe this is one of the crucial missing pieces in the public educational system”

The U.S. Naval Sea Cadet Corps is a federally chartered nonprofit youth development program for youth, from age 10 through the completion of high school, according to the Sea Cadets website.

All Muskegon Maritime Academy students will enter the Naval Sea Cadets program in 5th grade,” Fudail said. “This leadership program will help build the self-confidence and self-esteem of our students.”

Fudail began doing his research on opening a school over ten years ago when he started a boxing club and reading and math program for youth.

“I read an article over a decade ago about Amy Keating, a retired school teacher looking to start a school in Ferndale, Michigan and she was partnering with the Sea Cadets,” said Franklin A. Fudail, founder of Muskegon Maritime Academy. “I thought it was a great idea. When I got ready to pursue our school, I looked her up and I went to Okemos, Michigan to meet with her. She is a Commanding Officer with the Sea Cadets and gave me a lot of insight about this great organization.”

The USNSCC was established in 1962 by the Navy League of the United States at the request of the Department of the Navy.

In this program, Muskegon Maritime Academy Cadets will have the opportunity to participate in monthly drills with their unit. They will also attend advanced training camps in various fields, including field operations, robotics, space camp, leadership, and medical training.

“Local units hold four drills a month and drills are four hours, so they may do a whole weekend depending on the unit, or four Saturdays, it all depends,” LCDR. Jon Baker, regional director of Naval Sea Cadet Corps said.

The mission of the Sea Cadets, which is to build leaders of character coincides with the Muskegon Maritime Academy, Fudail stated.

Cadets have the privilege of wearing the U.S. Navy uniform with appropriate Sea Cadet insignia. Cadets have absolutely no commitment regarding future military service, but cadets who do decide to enlist may be eligible to enter at an advanced pay grade.

“We keep the training and activities separate with each group,” Baker said.

One of the biggest benefits is that youth participating in the Sea Cadet program will learn a great deal of leadership, he said.

“We have a very strong focus on appropriate leadership. They have to uphold their shipmates, so it becomes a very safe place for [boys and girls]. Our environment doesn’t have bullying or social cliques. Those are the lesson that they take away and we expect them to exhibit outside when they go back to their schools.”

Baker says that he is looking forward to the new partnership with MMA.

“The academy shares a focus of Maritime activities and training, so the students in their school will be in the Sea Cadet program as soon as they reach the age of ten, Baker said.

At the Academy, Fudail also created a Junior Cadet Program for grades 1-4.

“I did not want to wait until the 5th grade to start training, so I created a program based on my past experience working with youth. This program will start introducing discipline, etiquette, and manners in first grade”, stated Fudail.

“A lot of schools are chaotic and disruptive,” Fudail said. “Having a military-influenced program incorporated into the school will create a culture that will help us maintain an orderly environment, which will benefit our students in their quest to learn.”

Fudail said the Sea Cadet leadership has been nothing but helpful to establish the program in the school.

“From the moment I connected with Captain William Radomski and Lieutenant Commander and Regional Director Jon Baker, they have been nothing but supportive and helpful in our efforts to incorporate the Sea Cadets into our school,” Fudail stated.

“We are excited about having the Sea Cadet program incorporated into our curriculum, it sets our school apart from any school in Muskegon County. This is not just another charter school, this is a revolutionary approach to education. particularly for an urban community”, Fudail expressed.